Vitamin B and Alzheimers – A Groundbreaking Discovery? [Infographic]

Alzheimer’s disease (AD), the most common form of dementia, is neurological disorder that causes memory loss and cognitive decline. According to the Alzheimer’s Association, AD is the 6th leading cause of death in the United States. Every 66 seconds, someone in the US develops the disease. Current Alzheimer’s treatment consists of treating the symptoms rather than reversing the disease.  Our assisted living home in Surprise that specializes in Alzheimer’s treatment and care does what we can to help. Now it might seem there is a simple treatment that could make a big difference. Vitamin B and Alzheimers are starting to have more and more correlation. 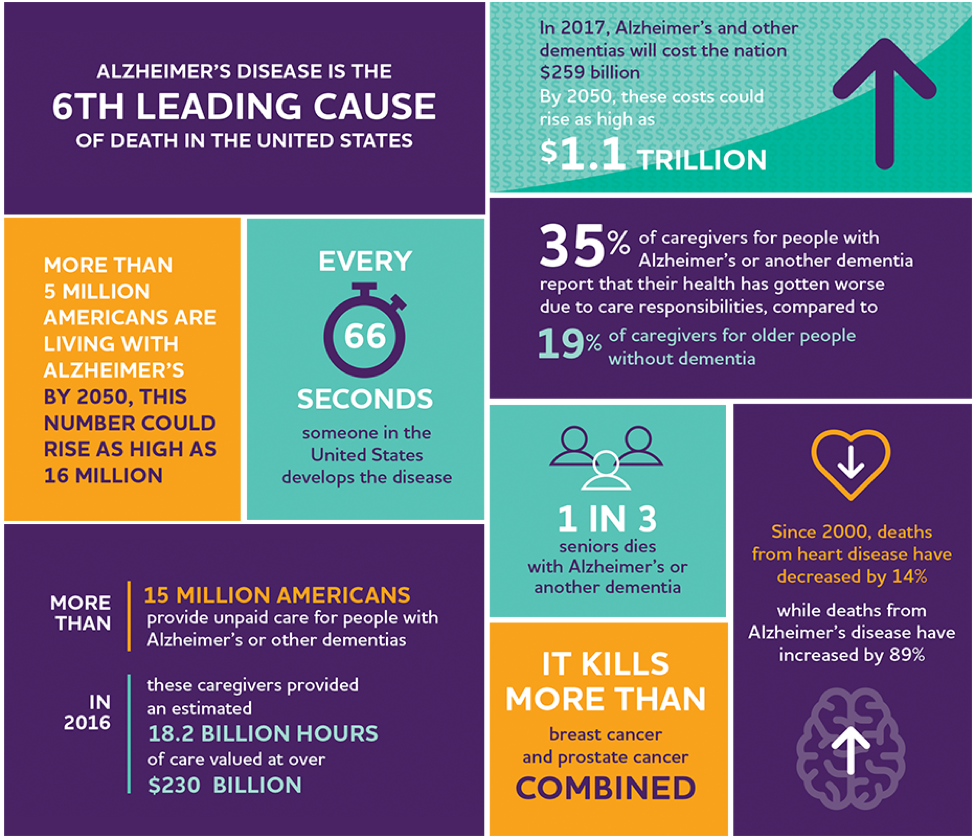 Initial stages of AD usually includes mild confusion and difficulty remembering. And since the disease is neurodegenerative, it will progress to substantial memory loss. People may forget their loved ones – and change their personality.

Currently, there is no known cure for AD. The Alzheimer’s treatments prescribed to patients are meant to lessen the severity of the symptoms and improve their quality of life.

Although there is no cure, most of the people with Alzheimers will require certain tests to determine the extent of the disease:

However, an article written in the Neuroscience Bulletin begs to disagree with the idea that there are no Alzheimer’s Treatments. A team of scientists found certain vitamins not only reduce Alzheimer’s symptoms, but also can reverse the disease. Scientists are talking about Vitamin B and Alzheimers like they may have found something very important

This year (2017), Alzheimer’s treatments will cost the nation around $259 billion dollars. That’s money poured into drugs that are largely ineffective in curing the disease. And this number will drastically rise to $1.1 trillion by the year 2050. That’s more than the present budget of Medicare. Alzheimer’s disease is not just a personal tragedy, but also a societal challenge.

There are more than five million Americans who are living with Alzheimer’s. It is projected that the number will grow to a whopping 16 million by the year 2050. Since there is no known cure, this kind of growth has a high likelihood of happening – especially as the Baby Boom generation reaches their senior years.

Pharmacologists are currently targeting a five-year delay of the disease’s onset in order to hamper 50% of the cases. In other words, nearly all prospective AD patients will be on these drugs..

There are 105 medicines under development for Alzheimer’s treatment, but what if they’re all going in the wrong direction? Merely scratching the surface of a deeper issue? In fact, 74 drugs out of the 105 focus on beta-amyloid plaques in the brain. Yet recent studies are increasingly showing that, contrary to popular belief, these plaques not the cause of memory loss occurring in AD patients.

What if they’ve been ‘wrong’ the whole time? Scientists are addressing Alzheimer’s disease as if it’s a drug deficiency. But they should probably also look into the possibility that AD may be caused by a nutrient deficiency that is brought about by diets that are high in carbs and sugar – a diet that is rampant in the United States. 100 years ago – when diets were much healthier – there were very low instances of AD.

Vitamin B and Alzheimers – A New Hope?

The conclusions of the Neuroscience Bulletin show that low levels of Vitamin B1 (also known as thiamine) play a significant role in the progress of Alzheimer’s memory loss. When your diet mostly consists of carbs and sugar, it increases your body’s need for B vitamins. And vitamin-B deficiency is linked to the abnormalities in the brain. Vitamin B and Alzheimers suddenly looks like there is a link.

The researchers took matters into their own hands. They applied lessons from the animal lab to human therapy for Alzheimer’s treatment.

They experimented on five early-stage Alzheimer’s victims. Each patient received 300 milligrams of B1 (Benfotiamine, a fat-soluble form of B1) – a daily vitamin – for a year and six months. After which, the participants underwent a PET scan and a series of mental function tests. These Vitamin B and Alzheimers treatments started showing some results.

Even though the participants had a continuous build-up of beta-amyloid found in their brains during the course of the research, the scientists surprisingly discovered that the progression of the brain dysfunction slowed and eventually reversed and improved. They also uncovered that the common form of the vitamin B1 found in most multivitamins does not produce this groundbreaking effect.

The results of the mental function tests and brain scans showed that the patients with early to mid-stage Alzheimer’s disease had about 36.7% of their brain restored. The Neuroscience Bulletin published this fascinating yet mind-boggling research in December 2016. However, the news never hit the big news media. 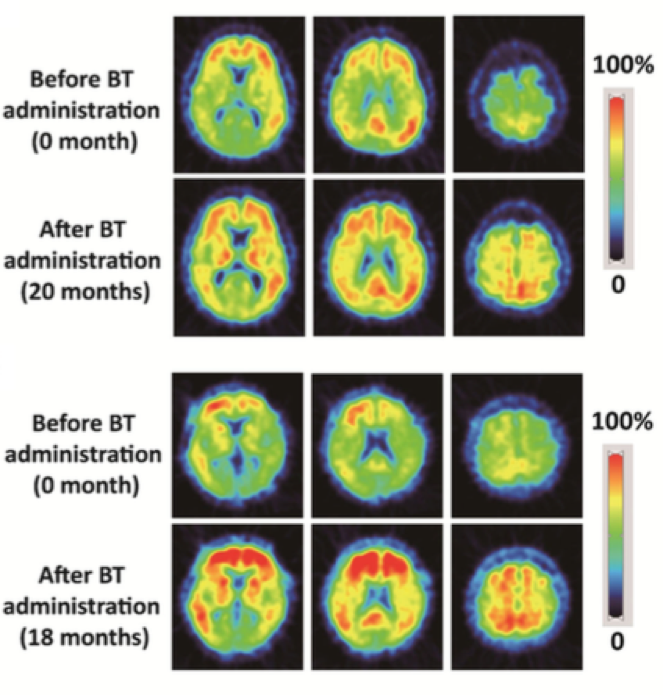 Judging from the image above, there is a striking improvement of the brain scans of Vitamin B and Alzheimers disease patients taking vitamin B1 (Benfotiamine). The ‘After BT (BT = Benfotiamine vitamin B1)’ photos show an accumulation of red and yellow areas which means that these areas of the brain are active.

Improving the Initial Vitamin B and Alzheimers Treatment Results

A more effective form of B1 is allithiamine – known to cross the blood-brain barrier. Small amounts of allithiamine exist in garlic cloves or certain dietary supplements.

It makes sense to have your Doctor check for Vitamin B1 deficiency if you suspect Alzheimer’s for yourself or your loved ones.

You can disclose this valuable information to your loved one’s doctor regarding this matter. However, this research is not recognized by the FDA and it is possible that your loved one’s doctor may be skeptical. Feel free to discuss this with them to raise awareness and understanding. The good news is that adding Vitamin B1 to your diet will not have any deleterious effects.