The Consequences of Lack of Sleep in Elderly People

Everyone knows that getting a good, restful night of sleep is very important for your health.  When we’re young that doesn’t seem to be too much of a problem. It’s amazing how some teenagers can sleep for 14-16 hours at a time with no problem. As we age, it seems like we have to work harder to make it 7-8 hours. Elderly people are frequently up many times during the night. Sleep deprivation can be a real problem for them. There can be some bad consequences of lack of sleep in elderly people. Sleep deprivation in elderly people can contribute to chronic diseases such as Alzheimer’s, Diabetes and Heart Disease.

In order to figure out how to improve our sleep, it’s important to understand how sleep works. The three main keys to sleep are:

Duration seems to be obvious – how long you sleep. It’s also how long you spend in different stages of sleep. Medical recommendations say that the elderly should still sleep at least 7 hours each night. Light sleepers understand intensity. Even if you sleep for 8 hours a night but don’t go into a deep sleep, you won’t feel rested. Much less than 7 hours is cause for concern about sleep deprivation in elderly people. Timing is important to sync your body with the day/night cycle. Timing is one of the toughest with seniors – especially when they have conditions like Sundowner’s. Being on a different schedule as everyone else can lead to consequences of lack of sleep in elderly people such as more stress.

Sleep Deprivation in Elderly People by the Numbers

Sleep deprivation in elderly people is becoming more and more of a problem. Many people are sleeping a lot less today than they did 30-40 years ago. A Gallup poll from several years ago found Americans are sleeping around 6.8 hours a night. That’s down an hour from the 1940s and it continues to decline. A lot of the decline is longer work times, commute times, and just general stress. And we are seeing the consequences of lack of sleep in elderly people. 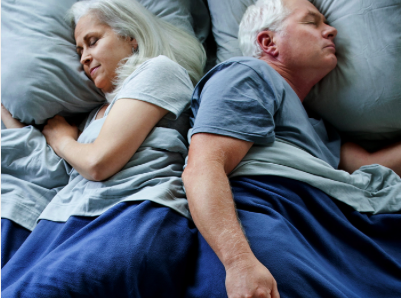 Another poll from the National Sleep Foundation found that the best sleepers had their timing down. They were very disciplined about falling asleep at the same time each night. Following a routine is important for maintaining good sleep health.

That means keeping the same schedule on the weekends as well as during the week. No trying to catch up after a long week.

It also is important for caregivers to think about a routine for both the people under their care AND themselves. It can definitely be hard at times, but definitely worth trying.

One of the keys to preventing sleep deprivation in elderly people and the intensity of sleep is the amount of Melatonin you produce. Melatonin is a hormone produced by your Pineal Gland that helps your body prepare for and go into a good sleep pattern. It sends a signal to your brain to:

Those are good preparations for a restful night of deep sleep. The trouble is that Melatonin depends on light signals from the outside world. If you stay inside all day and then stare at screens all night, you will produce a lot less Melatonin when you need it the most. That will affect your ability to have a deep, intense sleep.

Think of light like caffeine. It’s a great stimulant because it lowers Melatonin production. The more intense the light, the less Melatonin produced. Outside light is very intense – much more than indoor light.  We like drinking coffee (and caffeine) when we rise in the morning. So instead think about going outside in the sunshine for 10-15 minutes.

Or dragging the one you love out there as well. This will minimize Melatonin. As the day goes on it will lead to a rise later in Melatonin as you approach the evening.

Then as you approach the night, you would not want to drink a large amount of coffee as you go to bed. Same with the screens and artificial light. Try to reduce the device or television usage to allow those Melatonin levels to rise and prepare your body for sleep.

Developing a routine, allowing plenty of time for sleep and using light at the appropriate time will all contribute to those three important features of sleep. And better sleep leads to better health for you AND the ones you care about.