Let’s start this article by acknowledging that ‘Iowaska’ is not the best spelling for the drug known as ‘Ayahuasca’.  When I first learned what is Iowaska, I thought ‘Iowaska’ was how it was spelled. So it might be fun to leave it that way in this post. That way people like me who are not so great at spelling words in other languages could easily find information.

This drug is also known as Yage. Hopefully not too confusing. We’ll stick with Iowaska.

Recently one of our resident’s son travelled to Ecuador to find out more about what is Iowaska. He met with a Shaman and participated in several Iowaska ceremonies. I thought his story was interesting enough to look more into the Iowaska culture. Here is what I found.

For privacy reasons, I don’t want to delve deep into the son’s individual experience. Instead let’s look at aspects of this drug that would be good for anyone to know. Especially if they are contemplating using the drug.

Iowaska is officially a Tea made up from several plants native to South America. The two most common ingredients are Banisteriopsis caapi (also known as Caapi) and Psychotria viridis.  Without getting too scientific, Caapi contains substances called monoamine oxidase (MAO) inhibitors. Psychotria viridis (also known as Chacunra) contains something called Dimethyltryptamine, or DMT. DMT is considered a drug and is illegal to take in many parts of the world. 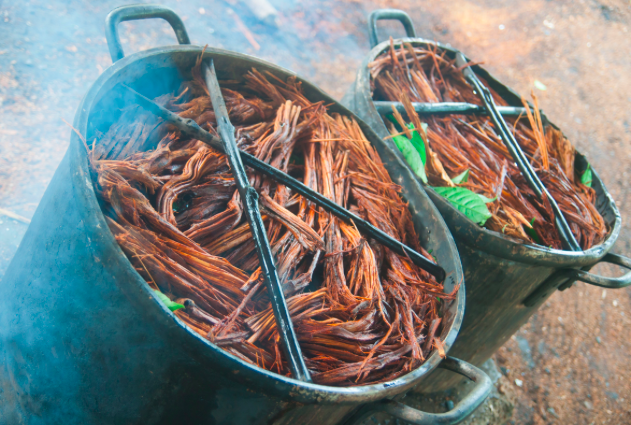 DMT on it’s own is not very potent if you drink or eat it. In your gut there are MAO enzymes that destroy DMT before it can spread throughout your body. You would have to inject DMT in order to feel the drug effects.

That’s where Caapi comes in. Those ingredients in Caapi ‘inhibit’ the MAO enzymes and allow the DMT to pass into your body. Your blood carries DMT across the blood brain barrier. The DMT is then able to produce the Hallucigenic effects that Iowaska brings about.

To prepare Iowaska, you soften the Caapi vine and boil it with leaves of Chacunra or other plants. Religious Shaman’s in South America are the most common producers of Iowaska The drink’s potency vary greatly among the different Shaman.

The potency and ingredients of the drink can also vary depending on what religious ceremonies the Shaman is seeking to perform.

Besides just the physical preparation of Iowaska, Shaman’s must follow a religious process to obtain the divine features of the drink they are seeking. For instance, the Shaman’s must pick the lower Chacruna leaf at Sunrise. And say a prayer while doing so.

The Shaman cleans the vine with wooden spoons only. Then he pounds the vine into fiber with wooden mallets. The total preparation of the Iowaska brew takes place over a whole day.

In traditional South American culture, everyone present for the religious ceremony drinks some of the tea. Think about communion for the Catholic Church.

These ceremonies (and religions) started to spread to North America and Europe in the late 20thCentury.  The first churches outside of South America sprang up in the Netherlands, following the Brazilian Santo Daime religion.

Here is a short video explaining more about the Santo Daime religion:

Remember that DMT is a controlled substance? Well the Dutch government immediately pounced on the church founders because they were using Iowaska in their ceremonies. The government knew what is Iowaska and what is in it. The founders fought it in court and won. The court determined that the drug is part of the church member’s religious freedom and did not constitute a grave danger to public health.

More and more people are asking what is Iowaska. Iowaska is becoming very popular in the United States, especially amongst backpackers and the Tech Industry. The tech guru Tim Ferriss (author of the Four Hour Work Week) told the New Yorker magazine:

“Ayahuasca is like having a cup of coffee here (San Francisco),” he said. “I have to avoid people at parties because I don’t want to listen to their latest three-hour saga of kaleidoscopic colors.”

Resorts are springing up around Central and South America to cater to the growing number of people who want to have the experience.

Here is an example of a resort in Costa Rica:

People generally go to Peru to find a retreat that offers Iowaska. Other countries offer it as as well, such as Ecuador where our resident’s one visited. You can also find the ceremonies in:

There is even the first legal Iowaska retreat in the United States starting up, thanks to the legalization of marijuana in Washington State.

Effects of Iowaska (and What to Watch Out For)

More importantly than asking what is Iowaska is asking what are its effects. Remember that Iowaska contains the Hallucinagenic drug DMT. Many compare Iowaska to the affects to LSD or Magic Mushrooms. So be very careful if you try this drug. Here are some of the affects and cautions from experienced users of the drug and ceremonial participants (including our resident’s son):

Here is a video of an Iowaska experience:

We like to hear the experiences of our residents and their families at A Paradise for Parents. We think it helps make our homes a larger and closer-knit family. If you look at our activities page, you will see that we do lots of stuff that brings us closer together. Just to be clear, we are not planning any Iowaska ceremonies at our homes in the future.

We’d love to have you consider joining our family. If we can be of any help, or answer any questions, please don’t hesitate to contact us. You can use the form at the bottom of our home page, email us at Info@aparadiseforparents.com, or call us at 623-295-9890.