7 Encouraging Developments in Types of Treatment for Dementia

Although we’re still a long way from a cure for the various forms of Dementia, there are some encouraging signs. Dementia treatment has come a long way in recent years. And we need new types of treatment for Dementia. According to the World Health Organization, another 10 million people a day receive a dementia diagnosis. Currently about 50 million people suffer from this dread disease. They estimate 82 million will have Dementia in 2030 and 152 million will have it in 2050.

Dementia is a bit of an umbrella terms for many different conditions. According to the dictionary, the definition of dementia is:

a usually progressive condition (such as Alzheimer’s disease) marked by the development of multiple cognitive deficits (such as memory impairment, aphasia, and the inability to plan and initiate complex behavior)

Some of the conditions grouped under the term dementia include: 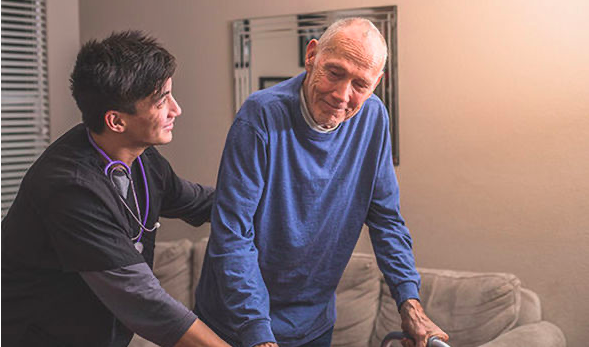 Types of Treatment for Dementia and Dehydration

Many Dementia sufferers become dehydrated. They don’t feel thirsty or don’t want to drink water. One clever young man found a way to encourage his grandmother to drink water. He created ‘Jelly Drops’ that look like sweet treats. These sweets are full of water. They also only have a few other ingredients such as gelling agents and electrolytes. The other ingredients only make up about 10% of the treat. 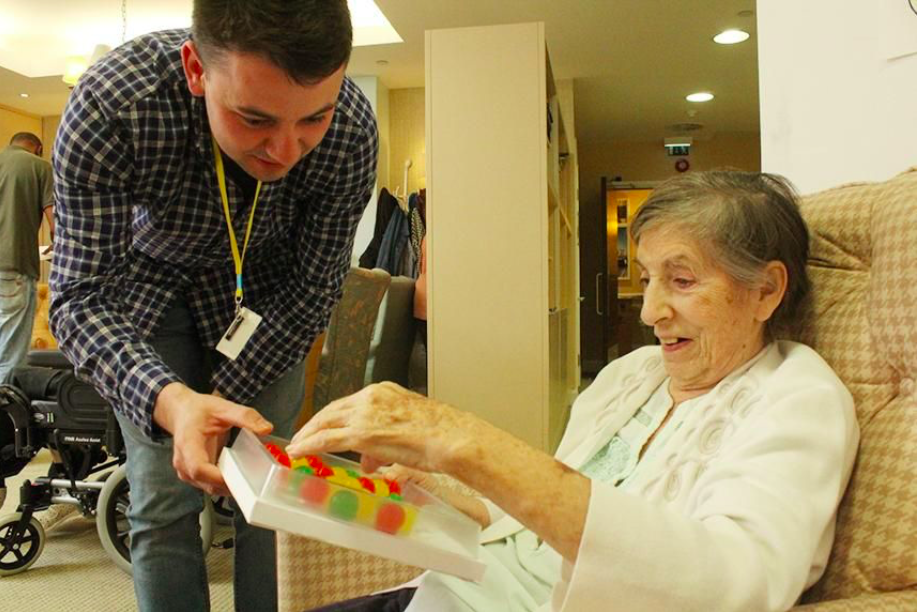 The treats are even packaged like a box of chocolates to make people feel like it’s a treat instead of a drink. Dementia patients have a much easier time eating than drinking. And everyone likes to eat treats. This may be an easy way to become hydrated without drinking water. We work on keeping our residents hydrated as part of our nutrition program, but sometimes it can be a real struggle.

The Jelly drops became so popular that the young man has started a business making them. He has also won some design awards for his invention.

Scientists have long suspected that the buildup of plaques in the brain are part of the problem with Dementia.  Last year some researchers at MIT found they could clear some of those harmful plaques in mice using strobe lights and a low-pitched buzzing sound.

No trials have been done on humans (as of early 2020 when I posted this). Researchers warn that human and mice brain waves are also quite different. However, if this works, it could be a very cheap dementia treatment with little to no side effects.

Types of Treatment for Dementia – Vaccines

A Chinese mother and daughter team in a business on Long Island New York recently developed an Endobody vaccine for Alzheimer’s. Most people think of vaccines as fighting diseases such as the flu and measles. Endobody vaccines help fix problems that internal organs cause. 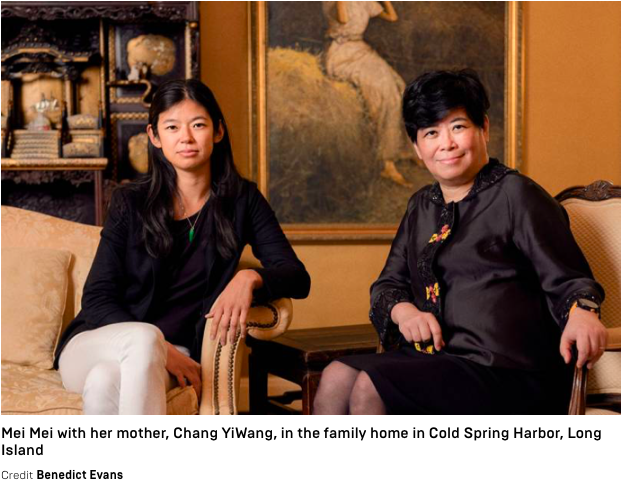 Prior to working on the Alzheimer’s vaccine, Chang Wi Yang (Mom) developed another Endobody vaccine. One vaccine helped removed testosterone from pigs to make them sterile. Only three other endobody vaccines have ever been developed. Two vaccines are for humans and two (including Chang Wi Yang’s) are for animals. 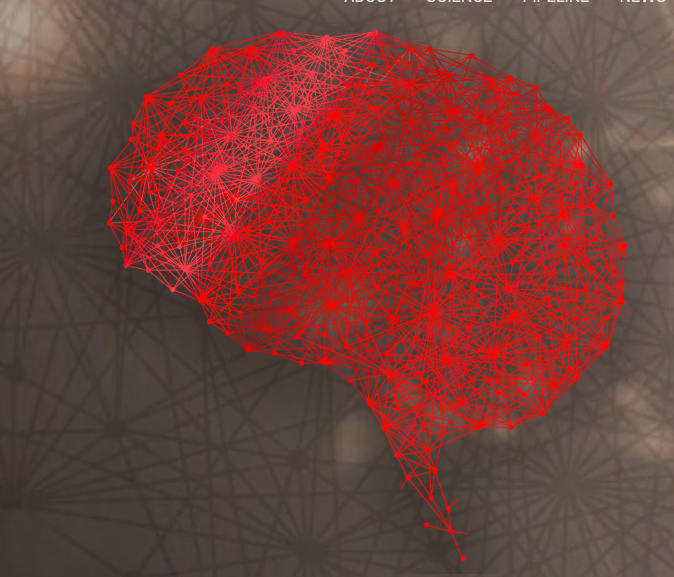 Now Chang Wi Yang is developing an endobody vaccine for Alzheimer’s under her family’s (Mother and Daughter) company, United Neuroscience. When the daughter Mei Mei took the vaccine to other Alzheimer’s researchers, they were ‘blown away’ by her mother’s work.

Chang Wi Yang’s vaccine introduces a specific sequence of amino acids that are present only in the beta-amyloid protein. Many researchers believe these proteins play a large role in Alzheimer’s. The amino acids create an antibody response which clear away the beta-amyloid proteins away while leaving the healthy surrounding proteins alone. And the vaccine does this without causing inflammation which can lead to further damage.

The vaccine is currently in Phase III trials. The Phase II trials were a great success in a small, statistically insignificant population.

Studies are Looking into Anticholinergic Drugs and Dementia

Say what? I didn’t know what ‘Anticholinergic’ Drugs are either prior to researching this article.  Certain drugs block a neurotransmitter in the brain called Acetylcholine. Any drug that blocks it is called Anticholinergic. Mostly doctors prescribe these drugs for conditions such as:

The side effects of these drugs include reduced cognitive function. It makes sense since it is blocking a way for the brain to transmit communication. The question is whether the cognitive function continues after the doctor discontinues the drug. 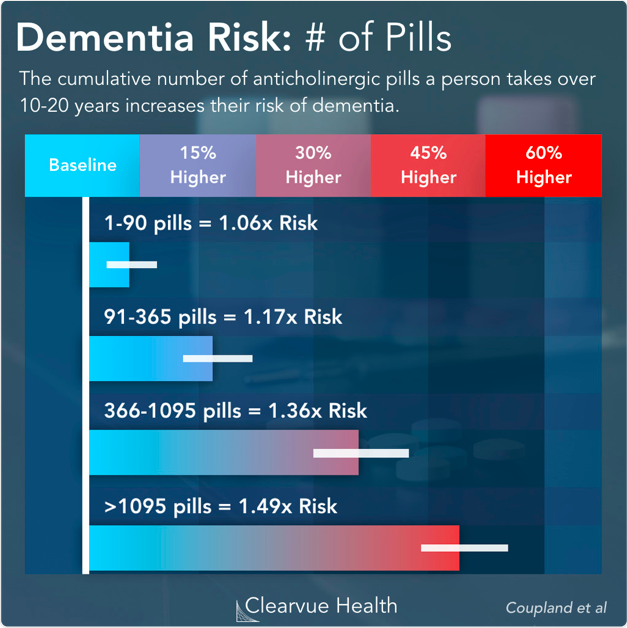 Recently the Alzheimer’s Association of the United Kingdom partnered with researchers to determine whether these drugs contribute to cognitive decline and dementia.

The studies are ongoing. If the studies show there is a connection, they will help with dementia treatment by reducing their prescriptions to people at risk for dementia. If they show no link to long-term cognitive decline, then the studies will provide peace of mind to older people who so often take these kinds of drugs.

GPS In Shoes for People with Dementia

This innovation is definitely in the category of “Why didn’t someone come up with this sooner?”  A Japanese company called Wish Hills created a small GPS device that can be put in any pair of shoes. Then someone can track those shoes on a smart phone or computer. 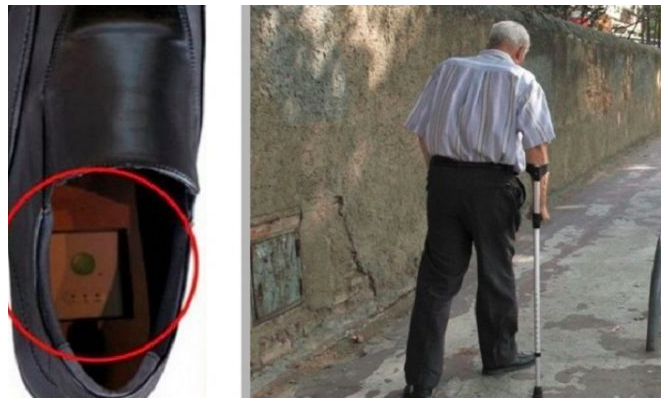 Families can slip these GPS devices in their loved one’s shoes. Then they can follow there loved one no matter where they roam. Dementia tends to cause people to wander. These shoes will help make people safer. 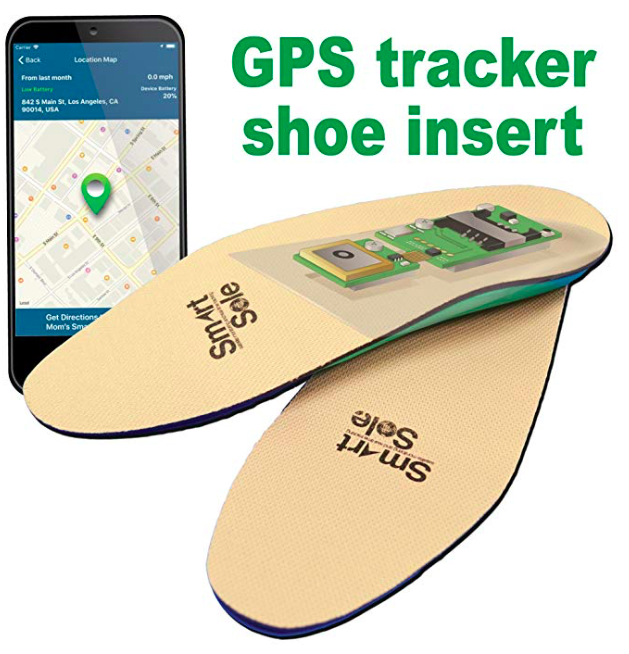 One nice feature of the Wish Hills shoes is that it can send an alert to your smartphone if the person wearing the shoes leaves their home. That way you don’t have to constantly monitor their whereabouts.

Unfortunately these GPS devices are only available in Japan at the moment. Another company, Smart Sole, has an insert you can slip into your loved one’s shoes to track them as well. You can buy the Smart Sole inserts on Amazon.

Both tracking devices come with a $300+ price tag. But it may be worth it to keep your loved one safe. And who knows? Technology has a funny way of dramatically dropping the price over time.

Weird Types of Treatment for Dementia  – a Pub

Sounds a bit crazy doesn’t it? For those of you not familiar, a pub is basically a British word for a bar. One innovative hospital in Swansea, Wales (part of the UK) has installed a ‘Pub’ in one of their all-male dementia wings.

The hospital realized that most of the men with dementia come from backgrounds where they worked long days at jobs requiring manual labor. At the end of the day when they were tired, they would go to a pub to relax and unwind. They would also socialize with their ‘mates’.

As the men grew older and started showing signs of Dementia, their memories started to fade. The decline starts with short-term memories. Some of the long-term memories stick around for a long time. Hence the idea that these men might remember hanging out at the pub. 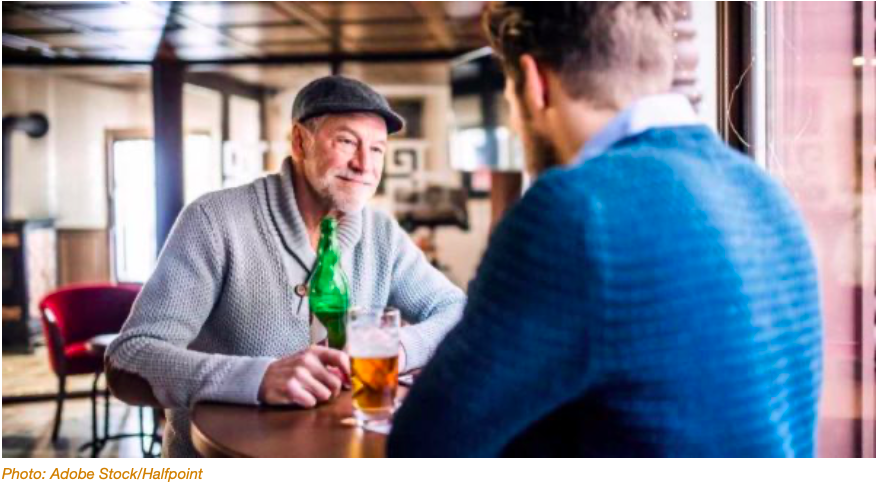 Many of the men also suffer from Sundowner’s Syndrome. Sundowner’s is very common with people who have Dementia. People become agitated or irritable as night comes on. They’re not sure what to do and can’t remember. Hospital workers in Swansea thought the men would feel much more comfortable if they knew it was time to go to the pub.

We all know it’s not a great idea to mix alcohol with medications normally given in a hospital. And this hospital knows it as well. All of the beer and drinks are non-alcoholic. They have also taken other precautions such as only using plastic darts for pub games. Otherwise the pub is very authentic with a bar, tables and other games.

It sounds like the “Derwen Arms” (the wing at the hospital is the Derwen Wing) has become a huge hit. The symptoms of Sundowners are decreasing. Some of the patients ask:

When is the Pub Opening? 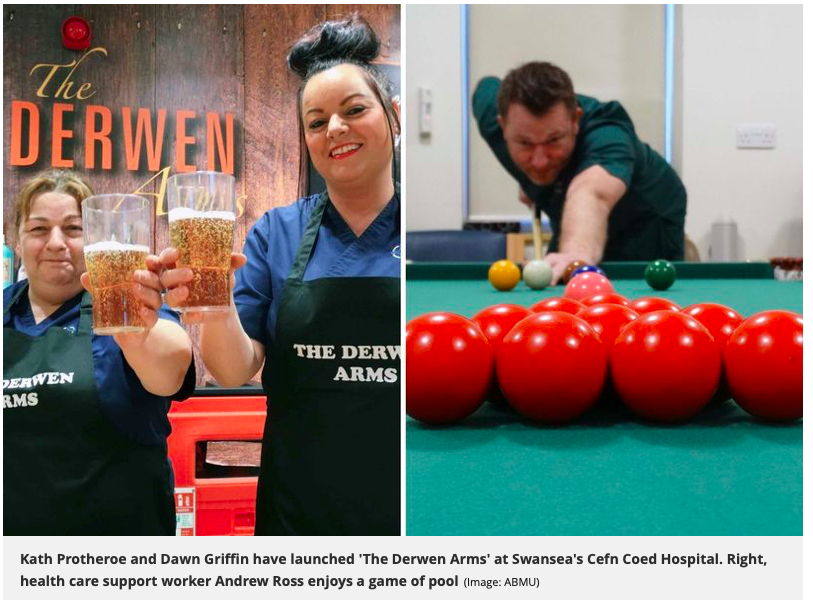 And many families are donating funds to improving the pub. 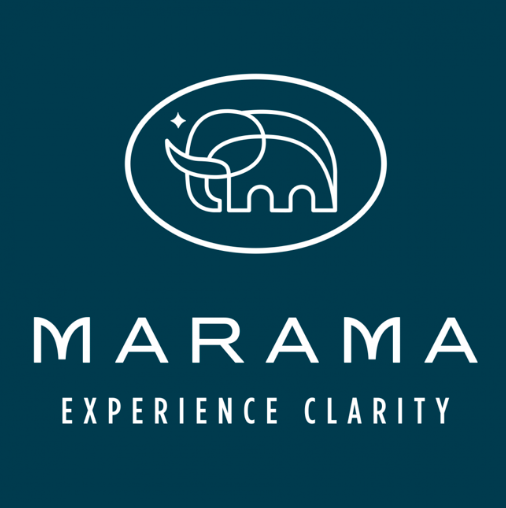 There is a new assisted living facility in Vista, California called the Marama Experience. The goal of this new facility is not just to provide dementia treatment. They want to try to reverse some of the progress of dementia and return people to independent living.

The Marama Experience seeks to help people by using the Bredesen Protocol. Dr. Dale Bredesen has been researching Alzheimer’s and Dementia for over 20 years. He has developed a program called the Bredesen Protocol that treats Dementia through lifestyle changes. Dr. Bredesen believes that there are multiple reasons people suffer from Dementia, including:

If people alter their lifestyle, Dr. Bredesen believes, people can reverse their cognitive decline. Some of the lifestyle changes include diet, exercise, sleep, and supplements. Patients have to be tested before a doctor can assign a specific lifestyle program. Dr. Bredesen has had great success with hundreds of people who follow his program. You can read more about his program here.

The trouble with the protocol is that you have to be self-disciplined. It’s easy to cheat on your diet or find an excuse for not 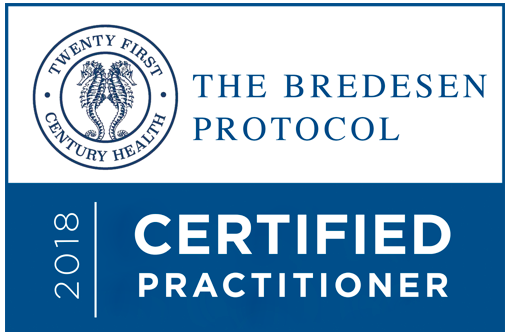 exercising. That’s where the Marama Experience comes in. The business owner is a Doctor who trained with Dr. Bredesen. She offers a place for people to come and live where they can’t cheat. People will learn healthy habits that they can take with them when they move out and return to normal living. All in a beautiful setting between San Diego and Los Angeles, CA.

The Bredesen Protocol is much more suited for people in the early stages of Dementia. However, it does bring hope to many. And the Marama Experience is a great way to facilitate the treatment!

Have you heard of any other great developments in dementia treatment? Please post them in the comments below if you have.