Is Alzheimer’s Genetic? – Are you at Higher Risk?

APOE4. No that’s not the ‘Group Number’ on your insurance card. It does, however, have a lot to do with your health. Especially if you are approaching middle age or later in your life. Scientists are finding out the answer to the question ‘is Alzheimer’s genetic?’. Alzheimer’s disease genetics plays a big role in determining whether you will contract the dreaded problem.

APOE4 is the name of a gene. Actually, the APOE is a gene. The ‘4’ refers to an allele on the gene. An allele is a specific form of a gene. Can you guess what some of the other forms of the gene are called?

Maybe you remembered what an allele is from your high school science class. If you do, then you’re better than me. I had to look it up.

The APOE gene is responsible for providing a protein (Alipoprotein E for you science geeks) that combines with fats to form molecules that package cholesterol and carry them through the bloodstream. It is an essential gene for human life.

Anyway, APOE4 is an allele you don’t want to have. APOE2 and APOE3 seem a lot better. For some reason this allele has a correlation to people who have Alzheimer’s disease.

Is Alzheimer’s Genetic to the Point Where I am Certain to Get it?

Alzheimer disease genetics is an emerging area of research.  If you have APOE4, it doesn’t mean you will definitely have Alzheimer’s.

Likewise, not having APOE4 doesn’t mean you definitely won’t have Alzheimer’s.

The good news is that only 25% of the population has one allele. Only 2-3% have two allele’s.

Want to find out if you have one or two copies? Use a genetic testing service. A company like 23andMe can check your DNA and let you know whether you have a copy of the allele.

Maybe you don’t want to know? After all there is no official cure for the disease. That’s up to you.

Is Alzheimer’s Genetic? Not Completely

From what I’ve read, however, your chances of having Alzheimer’s is also greatly influenced by the lifestyle you lead younger in life. Unhealthy habits such as smoking, drinking lots of alcohol and a poor diet can contribute significantly.

Perhaps knowing you have the gene may give you motivation to become healthier and help fight it. At least it is not all Alzheimer disease genetics. You control some of your fate. If you do find out you have one or two copies of the gene, there is a great internet support group and forum at Apoe4.info. It’s a lot of like-minded individuals trying to help each other out with support and the latest research. They also support people with family members struggling with the disease. 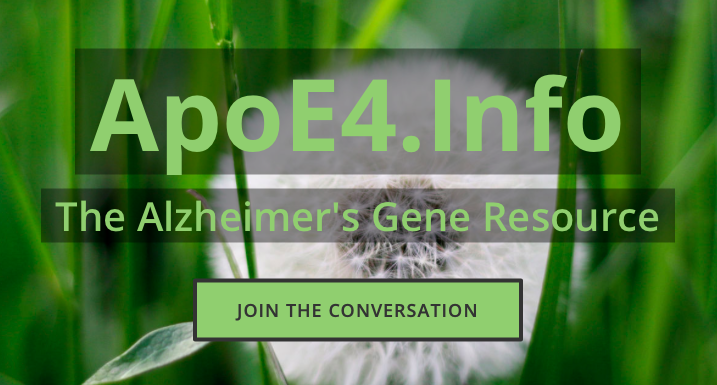 We also have a bunch of other blog posts on ways to help fight, prevent or even possibly reverse Alzheimer’s Disease (see here, here, here and here). Although it’s not easy, it seems worth the effort. Keeping your memories and senses intact for your whole life is a very worthwhile goal!